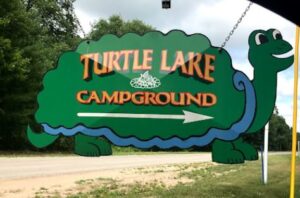 take to renovate, expand and improve Turtle Lake Campground, he might’ve changed his mind before he even got started. “I don’t know, I think I still would’ve done it,” he said with a smile as he eyed up another full weekend of campers. In the past four years, the campground has grown from 58 original sites to 144, most with electric and water hook up, and they added a new, separate 25-site equestrian camping area.

As a businessman and father, Keith Bonney was looking for something for his two daughters and he saw potential in the sleepy campground on quiet Turtle Lake in Benzie County. “They didn’t want to be in the excavating business,” he explained, “and I’ve always enjoyed camping. This was something I could build for them to run, and although their days are long in the summer, they have their winters off.”

It helped that Bonney has a successful family-owned excavating business, and the knowledge and equipment needed to do the necessary improvements. They’ve removed trees to let sunlight in and make room for more sites, added more sewer and electric hook-ups, improved the playground, installed a new dock, enlarged the pavilion area, graveled, and improved the roads and trails, re-surfaced the existing bathhouse, and they added a second larger bathhouse. As improvements were made, and amenities added, the influx of campers and reservations has grown.

“We’ve been full or almost full every weekend this summer,” he said. They have been approved for 209 sites and will be phasing them in over the next two years. When Bonney met the original owner, Janet Scott, in 2005, the campground was in dire need of upgrades, she was struggling to keep it open and managed with the help of a small group of dedicated campers who came in the spring and stayed through the fall. “She was reluctant to sell to just anyone because she didn’t want it developed, she didn’t want condos built,” Bonney explained, “She wanted it to stay a campground.”

As Bonney slowly earned her trust, she began to agree to let him make some improvements. “We did the beachfront first; we cut some trees, put up retaining walls, and brought in more sand. I had to plead with her every step of the way,” he said with a chuckle. One huge obstacle to any further business agreement was the county road that went right through the campground and had long been a safety concern. The road was not wide enough for two vehicles to pass, and it was difficult to negotiate in the winter. Bonney decided to build a new gravel road around the back of the campground, at his own time and expense. He had no idea what a bee’s nest he was about to stir up.

For the next three years, Bonney, with Scott’s support, became embroiled in a dispute with the neighbors who owned the two properties next to the campground. They didn’t want to see any changes or improvements to the road or surrounding area. Bonney continued to put in a 2200’ gravel road, built to county specs, even clearing it to 40’ wide rather than the required 35’ to allow for more room for snowmobiles in the winter. There was no money from the township or the county for it, so he did it at his own time and expense. The first summer the new road was open, and traffic through the campground dropped dramatically.

Scott passed away in 2011, and Bonney, daughters Heidi and Sara jumped in full time. Between directing loggers and tree trimmers, securing a mountain of permits, meeting with architects, practical engineers, inspectors, etc., putting in a 100’ x 200’ outdoor horse arena, to updating the website and reservation system, Bonney, his family, and crews have put in 60-80 hour weeks.

When asked where he’d like to be in five years, Bonney didn’t hesitate when he answered with a laugh “Content!”

Learn more about WHY you should camp with us at Turtle Lake Campground. Thank you for reading about "A Dad's Legacy".